Guide to Understanding the Net Operating Profit After Tax (NOPAT)

Net Operating Profit After Tax (NOPAT) represents a company’s theoretical after-tax operating income if it had no debt in its capital structure.

By removing the impact of financing differences in capital structures, comparisons between industry peers become more “apples to apples” – especially since discretionary decisions regarding leverage can significantly skew data sets.

How to Calculate NOPAT

NOPAT is an abbreviation that stands for Net Operating Profit After Tax – and is a measure of profit that assumes that the company did NOT receive tax benefits from holding debt.

Among industry practitioners, as well as in academia, the metric is frequently used interchangeably with terms such as:

So how exactly is the tax rate “adjusted”?

In particular, calculating the metric is a critical step in calculating a company’s available future free cash flows (FCFs), which serve as the foundation of the discounted cash flow analysis (DCF) method.

The calculation comprises multiplying EBIT by (1 – t), in which “t” refers to the target’s marginal tax rate.

EBIT is your gross profit minus the total operating expenses for the period – and the OpEx line item can include items such as depreciation, employee salaries, overhead, and rent.

While for purposes of modeling, the marginal tax rate can be used, the effective tax rate – the actual tax rate paid based on historical data – can also serve as a useful point of reference.

Another formula begins with net income and has a couple of additional steps to calculate the metric.

Just like the 1st formula, the next step is to multiply by (1 – Tax Rate).

Net income is a metric that accounts for the effects of non-core income / (losses), interest expense, and taxes, which is why we’re removing the impact of those line items from our calculation.

In theory, the metric should represent the core operating income (EBIT) of a company – taxed after removing the impact of non-operating gains / (losses), debt financing (e.g. “tax shield”), and taxes paid.

Thus, the net operating profit after tax is a company’s potential cash earnings if its capitalization were unleveraged — that is, if it had no debt, i.e. tax savings from existing debt are NOT included.

Let’s get started. First off, we’ll list out the operating assumptions that we’ll be using throughout our modeling exercise.

Conceptually, we know the goal is to net out the impact of estimated taxes from operating income (EBIT).

Here, we have two companies – Company A and Company B – which share the following financial data:

Until we reach the operating income line, the two companies have identical financials and profit margins.

But the financials begin to diverge because of a non-operating expense, interest expense.

At the pre-tax income line (EBT), we see the following divergence:

The source of the $100m difference is the interest expense mentioned earlier – furthermore, the taxes of the two companies vary significantly because of the tax savings associated with interest (i.e. the “interest tax shield”).

At a 35% tax rate, the companies pay the following taxes:

In the first approach, the calculation is straightforward as we just multiply EBIT by (1 – Tax Rate).

If we input the relevant data points into our formula, we get the following equation:

Note that despite the fact that Company B benefited from the interest tax shield, the value for both companies is equivalent. 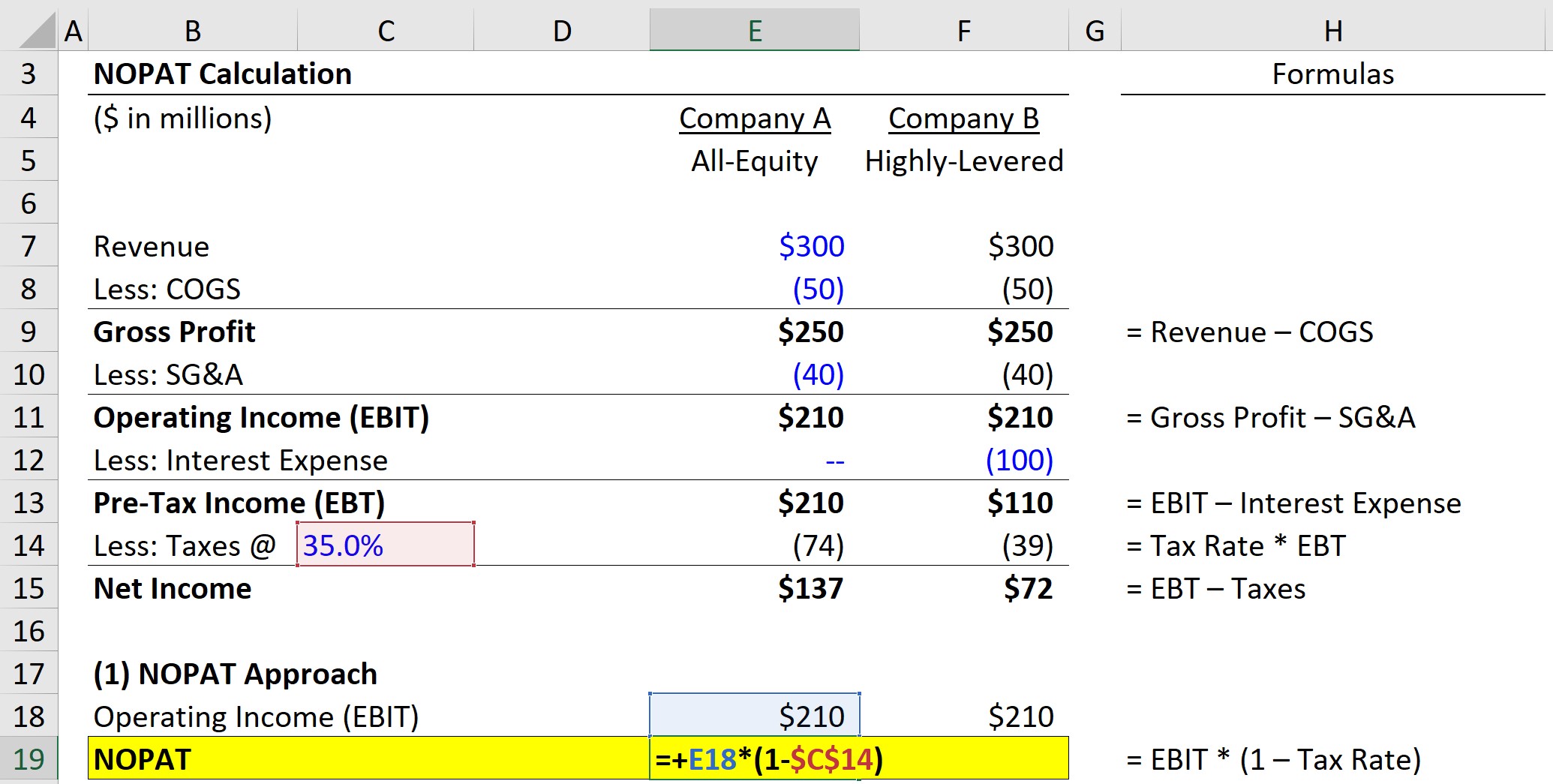 In the second approach, we’ll be starting from net income.

We need to work our way from net income to EBIT, before repeating the same process as the first approach.

So for both companies, EBIT comes out to $210m, and the subsequent step is the following:

To reiterate from earlier, the impact of debt financing is ignored – more specifically, the interest tax shield is removed.

In closing, we can confirm that under both methods, the NOPAT comes out to $137m – which shows the capital-structure neutrality of the metric. 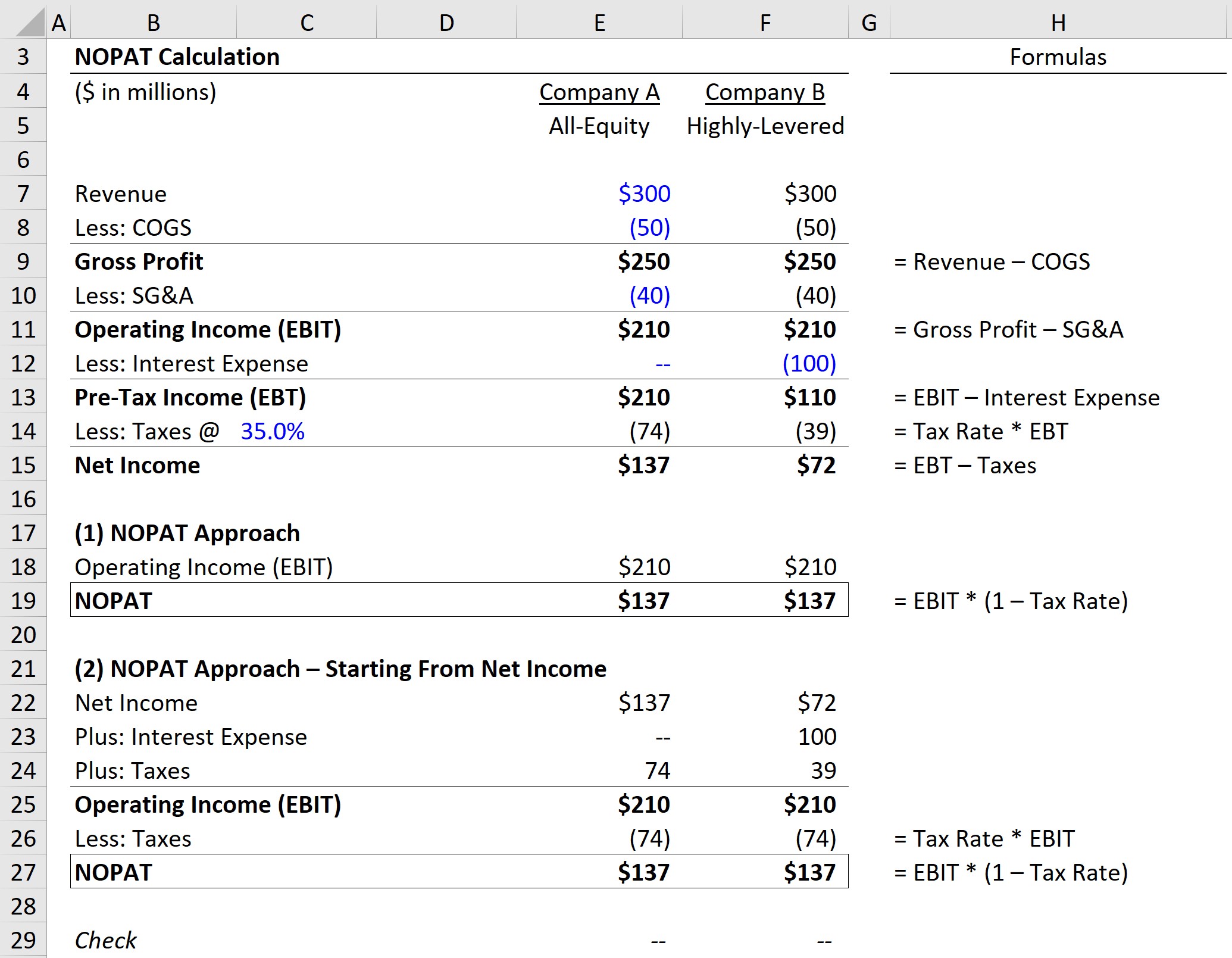