Understand the Cost of Debt Concept

What is the Cost of Debt?

The Cost of Debt is the minimum rate of return that debt holders require to take on the burden of providing debt financing to a certain borrower.

Compared to the cost of equity, the calculation of the cost of debt is relatively straightforward since debt obligations such as loans and bonds have interest rates that are readily observable in the market (e.g. via Bloomberg).

How to Calculate the Cost of Debt (kd)

The cost of debt is the effective interest rate that a company is required to pay on its long-term debt obligations, while also being the minimum required yield expected by lenders to compensate for the potential loss of capital when lending to a borrower.

For example, a bank might lend $1 million in debt capital to a company at an annual interest rate of 6.0% with a ten-year term.

The question here is, “Would it correct to use the 6.0% annual interest rate as the company’s cost of debt?” — to which the answer is a “No”.

On the date that the original lending terms were agreed upon, the pricing on the debt — i.e. the annual interest rate — was a contractual agreement negotiated in the past.

If the company were to attempt to raise debt in the credit markets right now, the pricing on the debt would most likely differ.

The diligence conducted by the lender used the most recent financial performance and credit metrics of the borrower as of that specific period (i.e. the past), as opposed to the current date.

Nominal vs Effective Cost of Debt

Remember the discounted cash flow (DCF) method of valuing companies is on a “forward-looking” basis and the estimated value is a function of discounting future free cash flows (FCFs) to the present day.

With that said, the cost of debt must reflect the “current” cost of borrowing, which is a function of the company’s credit profile right now (e.g. credit ratios, scores from credit agencies).

The process of estimating the cost of debt requires finding the yield on the existing debt obligations of the borrower, which accounts for two factors:

The cost of debt is the interest rate that a company is required to pay in order to raise debt capital, which can be derived by finding the yield-to-maturity (YTM).

The YTM refers to the internal rate of return (IRR) of a bond, which is a more accurate approximation of the current, updated interest rate if the company tried to raise debt as of today.

While using the market-based yield from sources like Bloomberg is certainly the preferred option, the pre-tax cost of debt can be manually calculated by dividing the annual interest expense by the total debt obligation — otherwise known as the “effective interest rate”.

The effective interest rate is defined as the blended average interest rate paid by a company on all its debt obligations, denoted in the form of a percentage.

On the Bloomberg terminal, the quoted yield refers to a variation of yield-to-maturity (YTM) called the “bond equivalent yield” (or BEY).

The “effective annual yield” (EAY) could also be used (and could be argued to be more accurate), but the difference tends to be marginal and is very unlikely to have a material impact on the analysis.

The EAY is the annualized yield that incorporates compounding, whereas BEY annualizes a bond’s semi-annual yield by simply doubling it (e.g. 3.0% x 2 = 6%) — which while a frequently criticized convention, is still widely used in practice.

Calculating the cost of debt differs depending on whether the company is publicly traded or private:

For companies with no publicly-traded debt, the options to estimate the cost of debt are as follows:

In the calculation of the weighted average cost of capital (WACC), the formula uses the “after-tax” cost of debt.

The reason why the pre-tax cost of debt must be tax-affected is due to the fact that interest is tax-deductible, which effectively creates a “tax shield” — i.e. the interest expense reduces the taxable income (earnings before taxes, or EBT) of a company.

Note the tax benefits of debt financing are accounted for in the company’s discount rate inclusive of all capital providers (or the WACC), which is why the DCF uses the net operating profits after tax (NOPAT) in its calculation to avoid double-counting.

The difference between the pre-tax cost of debt and the after-tax cost of debt is attributable to how interest expense reduces the amount of taxes paid, unlike dividends issued to common or preferred equity holders.

As a preface for our modeling exercise, we’ll be calculating the cost of debt in Excel using two distinct approaches, but with identical model assumptions.

Provided with these figures, we can calculate the interest expense by dividing the annual coupon rate by two (to convert to a semi-annual rate) and then multiplying by the face value of the bond. 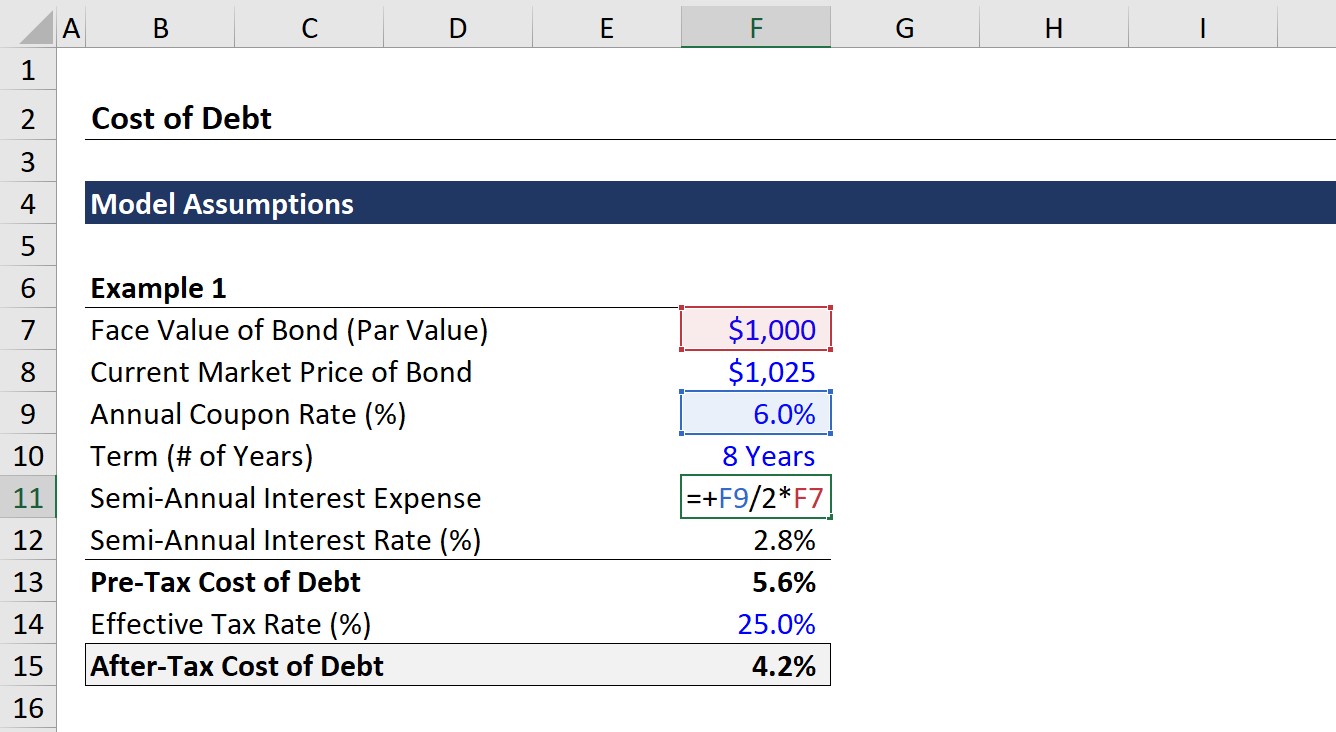 Each year, the lender will receive $30 in total interest expense twice. 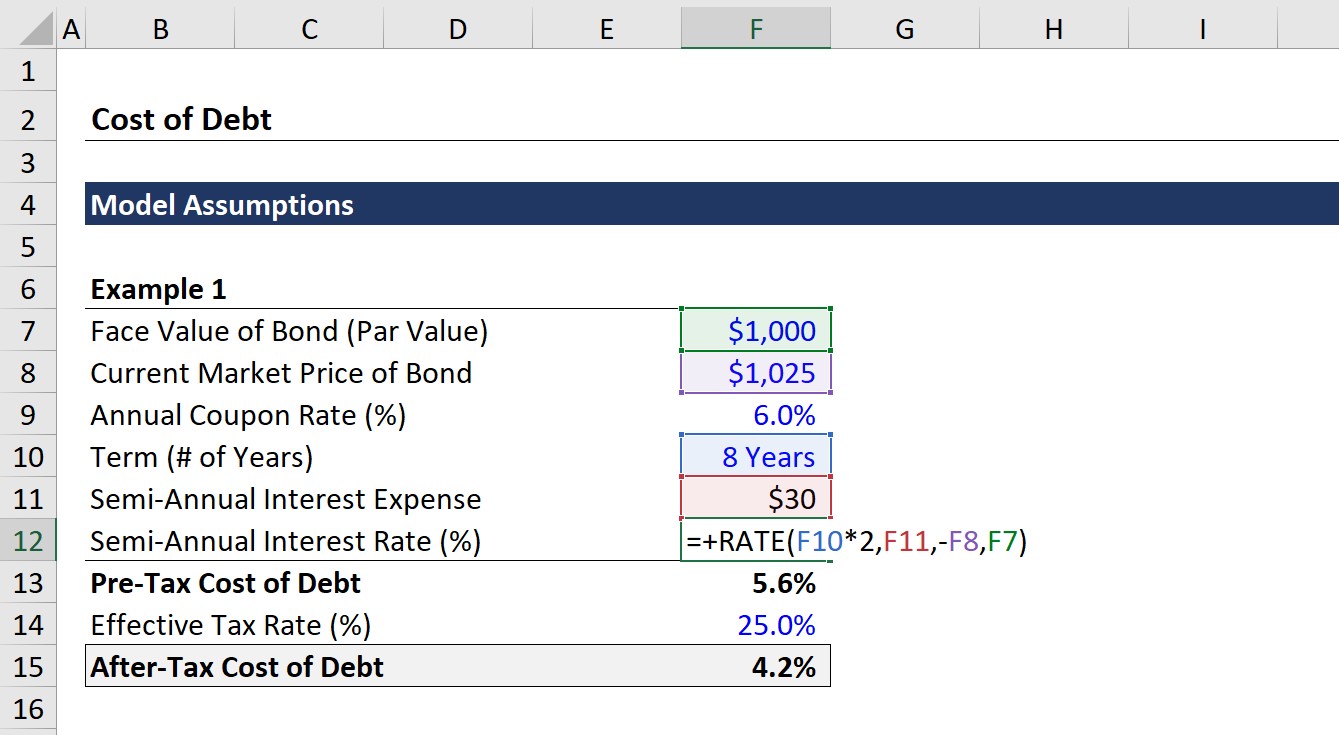 Since the interest rate is a semi-annual figure, we must convert it to an annualized figure by multiplying it by two. 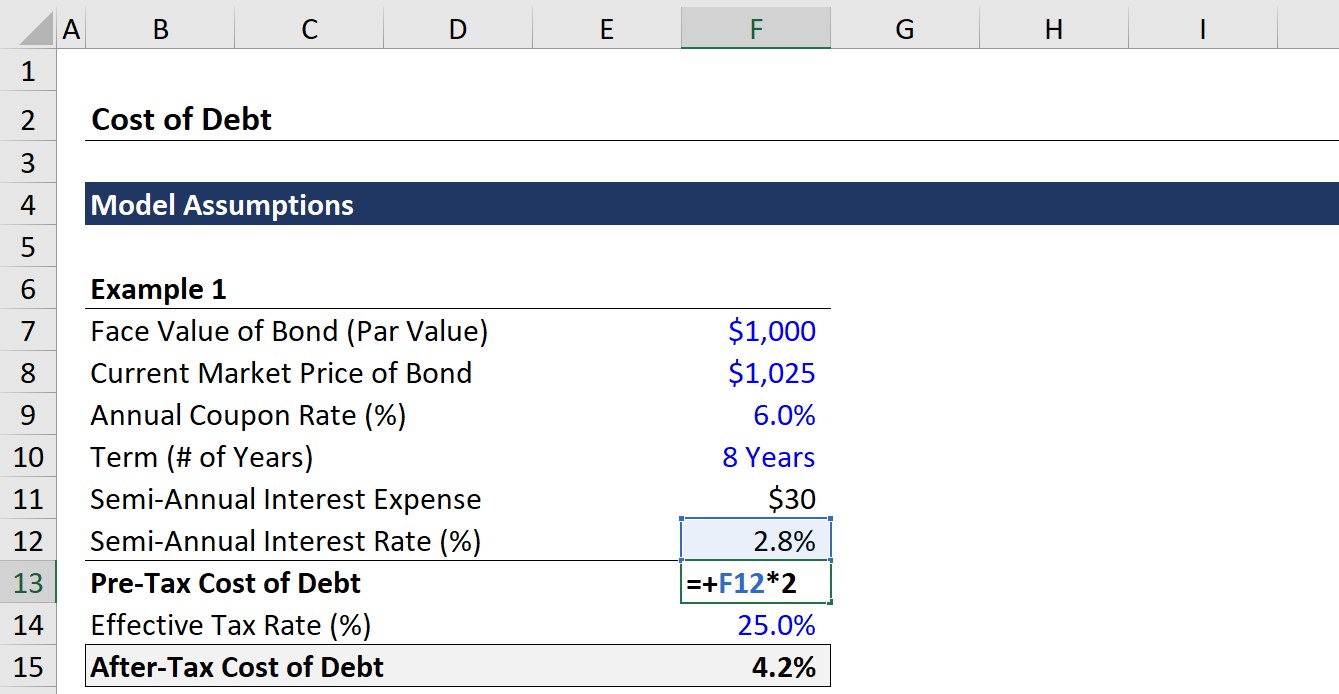 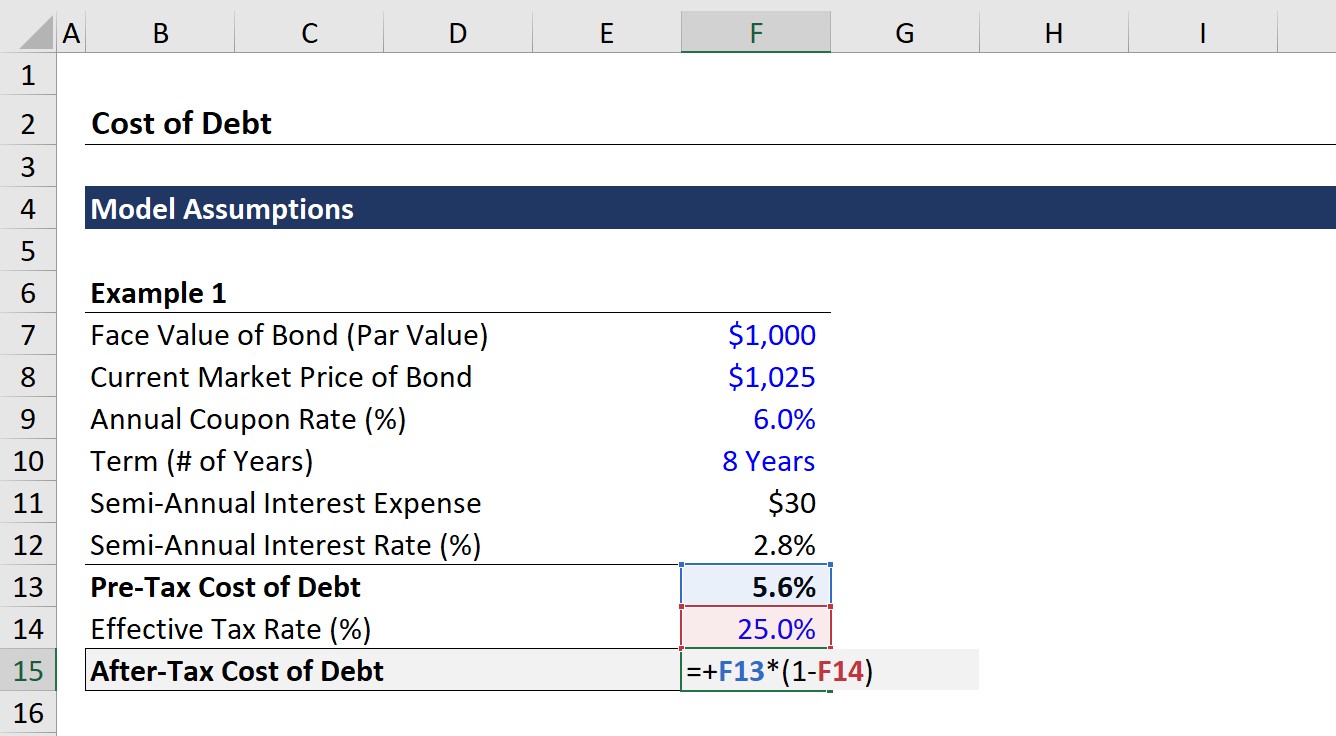 For the next section of our modeling exercise, we’ll calculate the cost of debt but in a more visually illustrative format.

In our table, we have listed the two cash inflows and outflows from the perspective of the lender, since we’re calculating the YTM from their viewpoint.

The face value of the bond is $1,000, which is linked with a negative sign placed in front to indicate it is a cash outflow.

In the subsequent steps, we will enter the annual coupon payments across the lending term.

Using the “IRR” function in Excel, we can calculate the yield-to-maturity (YTM) as 5.6%, which is equivalent to the pre-tax cost of debt.

Therefore, the final step is to tax-affect the YTM, which comes out to an estimated 4.2% cost of debt once again, as shown by our completed model output.