What are Non-GAAP Earnings?

Non-GAAP Earnings are reported by public companies along with their GAAP financial statements.

The Generally Accepted Accounting Principles (GAAP) are the standardized set of rules for reporting earnings that publicly-traded companies in the U.S. must abide by.

However, the disclosure of non-GAAP metrics has become common practice under the notion that these reconciliations portray historical results more accurately (and improve forecasts of future performance).

Non-GAAP earnings are meant to normalize historical performance and set a more accurate reference point for forecasts to be based upon.

While GAAP attempts to establish uniformity among the financial statements of public companies, it is still an imperfect reporting standard with instances where GAAP earnings can become distorted.

Namely, there are two types of items that can skew earnings and cause GAAP earnings to be misleading to investors.

Both non-recurring items are recorded on the income statement and affect net income (i.e. the “bottom line”).

Since the purpose of forecasting is to project a company’s future performance – specifically the cash flow generation from its core operations – removing the impact of these sorts of items should theoretically depict a more accurate picture of past and ongoing performance.

However, note that the validity of each non-GAAP reconciliation must be analyzed because the discretionary nature of these adjustments creates room for bias and potentially inflated earnings.

In particular, one of the most common non-GAAP metrics is “Adjusted EBITDA”.

The adjusted EBITDA metric is commonly perceived as the most accurate measure of core operating performance, as it facilitates comparisons across peer companies irrespective of varying capital structures and tax jurisdictions.

For instance, the offer values in M&A transactions are often denoted in terms of an EV/EBITDA multiple.

To calculate EBITDA, D&A is added back to EBIT, which is followed by other adjustments such as removing stock-based compensation.

But to reiterate, these discretionary adjustments can allow companies to conceal poor GAAP operating performance with non-GAAP results.

Therefore, all non-GAAP disclosures and earnings must be viewed with sufficient skepticism to avoid being misled.

Suppose a company’s GAAP earnings for fiscal year 2021 were reported as the following:

Given those reported figures, most would perceive the company’s financial results negatively, as its margin profile appears unsustainable.

But let’s say that management has also provided non-GAAP metrics as part of their disclosures to support their financial statements.

All three of those items can be added back by management, resulting in a non-GAAP EBIT of $30 million.

Per management’s non-GAAP reconciliation, the company’s non-GAAP operating margin is 30% whereas its adjusted EBITDA margin is 40% – reflecting a financial state much more favorable what its GAAP financials implied. 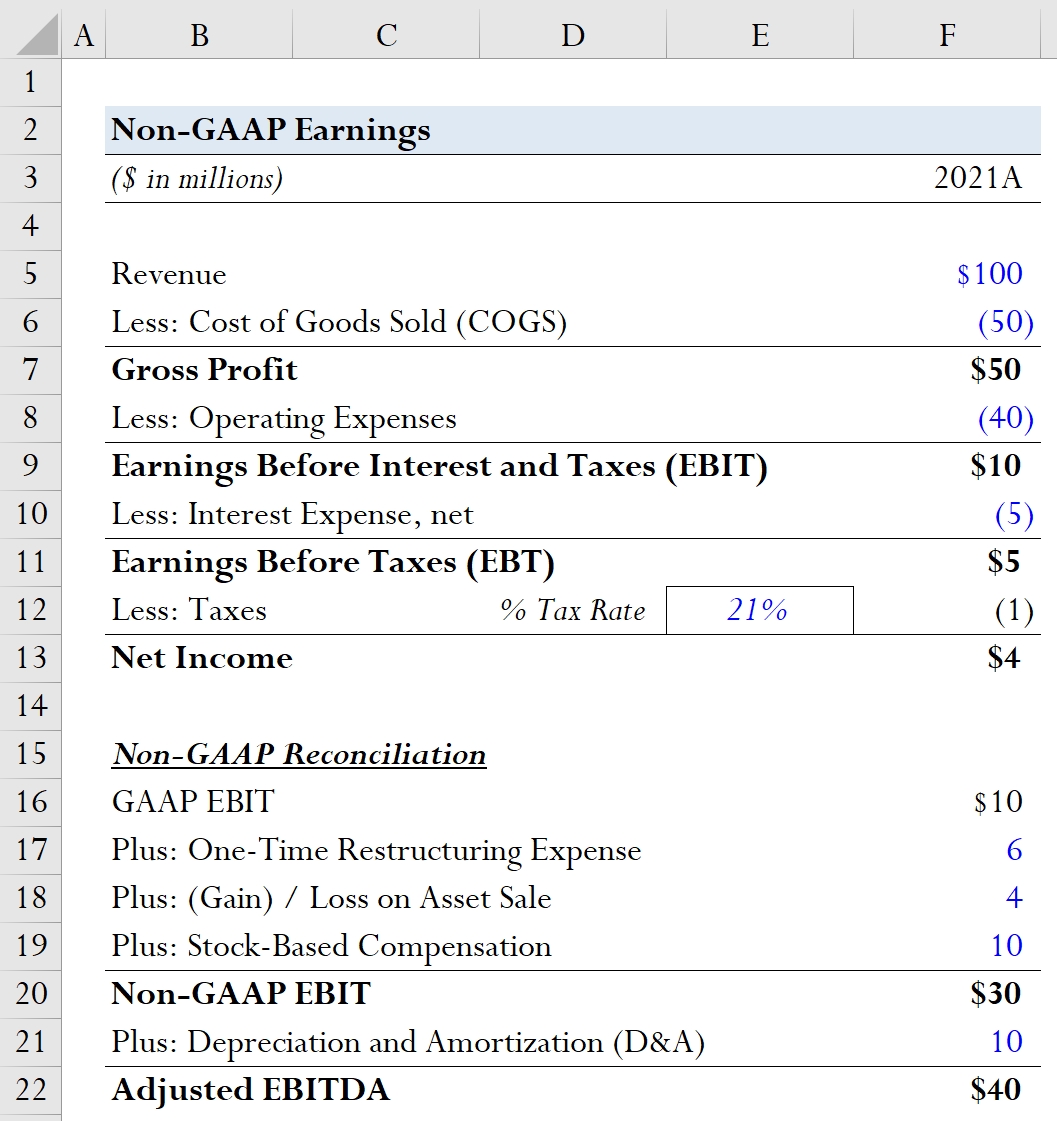