Guide to Understanding the Return on Invested Capital (ROIC) Concept

Return on Invested Capital (ROIC) measures the percentage return of profitability earned by a company using the capital invested by equity and debt providers.

ROIC is frequently used to determine the efficiency at which capital is allocated because the consistent generation of a positive value is perceived positively as a necessary attribute of a quality business.

How to Calculate ROIC

The term ROIC stands for Return on Invested Capital and represents how well a company has put its capital to work in order to generate profitable returns on behalf of its shareholders and debt lenders.

Since the return metric is presented in the form of a percentage, the returns metric can be used to assess a company’s profitability as well as make comparisons to peer companies.

However, one of the more frequent use-cases of tracking the metric is for evaluating the judgment of the management team regarding capital allocation.

For companies attempting to raise capital from outside investors for the first time or raise additional funding, the ROIC is a very important KPI that can serve as “proof” that management is competent and can be relied upon to pursue and capitalize on profitable opportunities.

NOPAT is typically used in the numerator because it captures the recurring core operating profits and is an unlevered measure (i.e. unaffected by the capital structure).

Unlike metrics such as net income, NOPAT is the operating profits post-taxes and thus represents what is available for all equity and debt providers.

Capital refers to debt and equity financing, which are the two common sources of funds for companies that are used to invest in cash flow generative assets and derive economic benefits.

There are two routes to think about invested capital, but either approach is ultimately identical to the other due to double-entry accounting.

The alternative, simpler method to calculate the invested capital is to add the net debt (i.e. subtract cash & cash equivalents from the gross debt amount) and equity values from the balance sheet.

Note that cash and cash equivalents (e.g. marketable securities) are not operating assets and thereby excluded – along the same lines, all debt and interest-bearing securities are not considered operating liabilities, either.

Cash is considered to be “sitting idle” on the B/S and is thus not part of the core operations of a company.

ROIC quantifies the profits that the company can generate for each dollar of capital invested into the company in the form of a percentage.

Simply put, the profits generated are compared to how much average capital was invested in the current and prior period.

If a company generated $10 million in profits and invested an average of $100 million in each of the past two years, the ROIC is equal to 10%.

For instance, if the ROIC is 10%, that tells us the company generates $10 of net earnings with each $100 invested in the company.

ROIC is one method to determine whether or not a company has a defensible “economic moat”, which is the ability of a company to protect its profit margins and market share from new market entrants over the long run.

The overall objective of calculating the metric is to grasp a better understanding of how efficiently a company has been utilizing its operating capital (i.e. deployment of capital).

For investors in the public markets, the metric is frequently used to screen for potential investment, not just for retail investors but for institutional investors such as hedge funds — especially funds utilizing long-only, value-oriented strategies.

Finding public companies in the stock market with an actual “moat” and consistently above-market ROICs is without a doubt is easier said than done, but one that can yield high investment returns.

The reason that the ROIC concept tends to be prioritized by value investors is that the majority of investors purchase shares under the mindset of a long-term holding period.

Hence, the current earnings and cash flows are a relatively small component of the total net return — instead, the ability to reinvest those earnings to build real value is much more important.

Generally, the higher the return on invested capital (ROIC), the more likely the company is to achieve sustainable long-term value creation.

Companies with high returns on invested capital are more likely to continue employing capital thoughtfully to achieve returns in line with the past (or similar) – it is usually very rare to come across such opportunities at the right time and share price.

One common way to use ROIC as an investment decision-making tool is to compare the investment’s ROIC to its weighted average cost of capital (WACC).

Comparing the ROIC to the WACC can help decide whether or not the company creates sufficient value for its stakeholders.

Companies that generate an ROIC above their cost of capital implies the management team can allocate capital efficiently and invest in profitable projects, which is a competitive advantage in itself.

When investors screen for potential investments, the minimum ROIC tends to be set between 10% and 15%, but this will be firm-specific and depend on the type of strategy employed.

From the expanded formula of ROIC, we can see the value is the product of:

NWC affects the invested capital since if operating assets increase, invested capital increases as well – which in turn decreases the metric (i.e. more spending is needed to sustain or increase growth).

Conversely, if operating liabilities were to increase, ROIC would increase because NWC is lower.

A higher return on invested capital can be considered an indication that a company is required to spend less to generate more profit.

The higher the profit margins of the company, the higher the return on invested capital, as the company can convert more revenue into profits, or NOPAT, to be more specific.

Contrary to a common misunderstanding, growth is not always a positive signal for a company.

The question that must be asked is: “At what cost was the growth obtained?”

Often, companies will make significant investments to expand, but if the ROIC is lower than the cost of capital (WACC), the CapEx destroyed value as opposed to creating shareholder value. 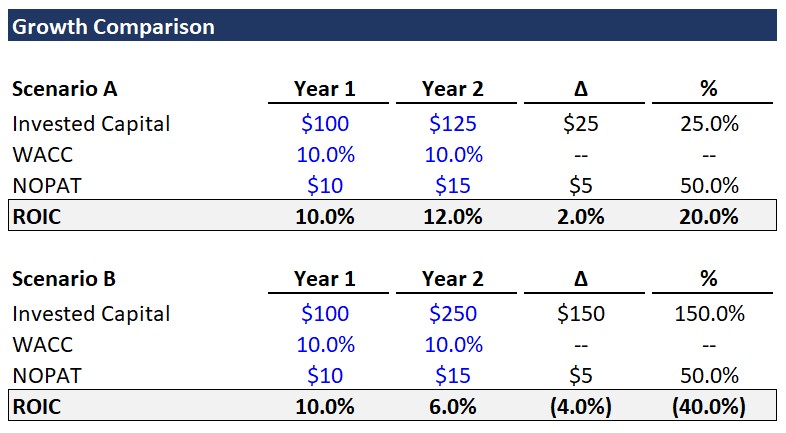 In Scenario A, the change in invested capital was $25m more for an increase of $5m in NOPAT.

In contrast, in Scenario B, the NOPAT increased $5m too but $150m was spent, so focusing on the growth in NOPAT by itself would be misleading in the latter case.

In our example modeling exercise, we’ll be using the following assumptions.

From Year 0 to Year 5, revenue is projected to grow $2m per year while EBIT grows $4m per year under the same time horizon, as shown below. To reflect this, we’ll use step functions as seen in the right side of the model.

Based on these sets of assumptions, note the growth of NOPAT is outpacing revenue, which will increase the likelihood of ROIC increasing – unless the invested capital offsets the margin expansion.

For the working capital schedule and fixed assets forecast, the following assumptions will be used:

Once the entire forecast has been filled, we can calculate the ROIC in each period by dividing NOPAT by the average between the current and prior period invested capital balance. 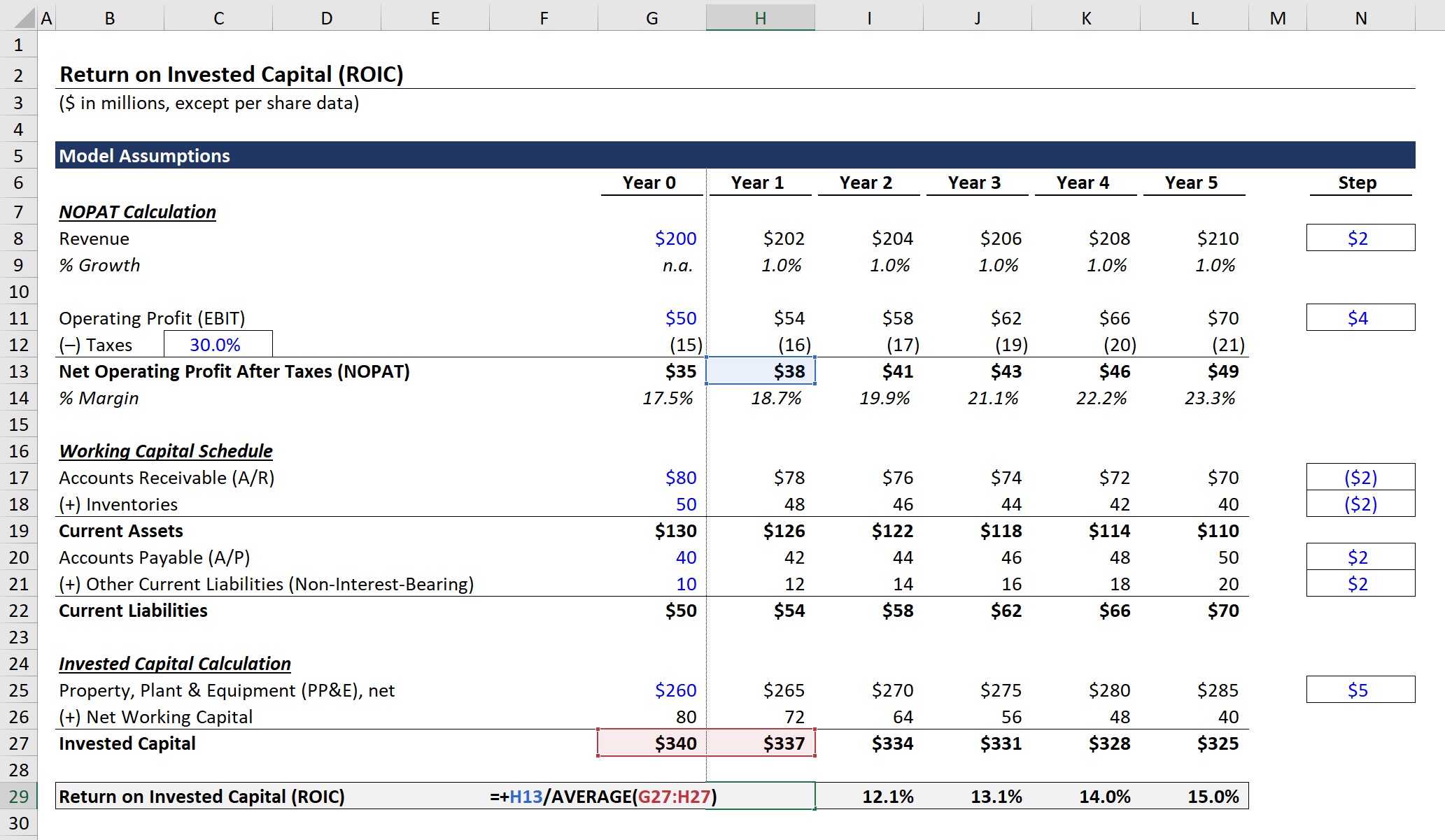 Starting from Year 1 to Year 5, we can see an increase from 11.2% to 15.0%, which is caused by the increased profit margins and the increase in operating current liabilities.

In the final step, we multiply the NOPAT margin % by the average invested capital balance of the current and prior year to get the same ROICs, which confirms our calculations were done correctly. 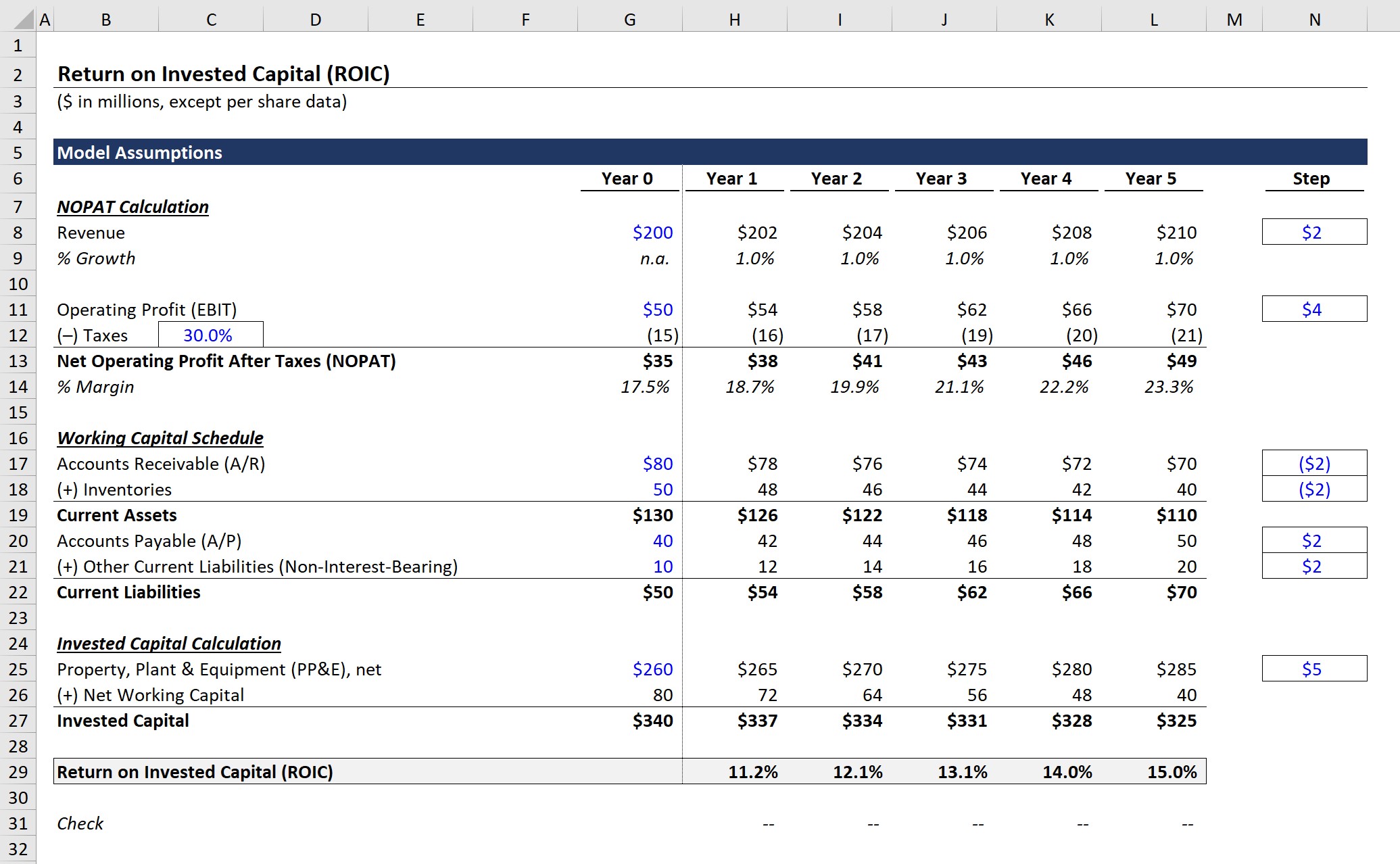