Understand the Return on Sales Concept

What is Return on Sales?

The Return on Sales is a ratio used to determine the efficiency at which a company converts its sales into operating profit.

The return on sales ratio, also known as the “operating margin,” measures the amount of operating income generated per dollar of sales.

Therefore, the return on sales answers the question:

On the income statement, the “Operating Income” line item – i.e. earnings before interest and taxes (EBIT) – represents the residual profits of a company once its cost of goods (COGS) and operating expenses (SG&A) have been subtracted.

With that said, the more sales that “trickle-down” to the operating income line, the more profitable the company is likely to be – all else being equal.

The return on sales ratio establishes a relationship between two metrics:

Both the operating income and sales of a company can be found on the income statement.

The formula for calculating the return on sales ratio consists of dividing operating profit by sales.

In order to express the ratio as a percentage, the calculated amount must then be multiplied by 100.

By denoting the ratio in percentage form, it is easier to conduct comparisons across historical periods and against industry peers.

The gross profit margin and the return on sales (i.e. operating margin) are two frequently used metrics to evaluate a company’s profitability.

Both compare a company’s profit metric to its total net sales in the corresponding period.

The difference is that the gross margin utilizes the gross profit in the numerator, whereas the return on sales utilizes operating profit (EBIT).

Moreover, the gross profit only subtracts COGS from sales, but operating profit subtracts both COGS and operating expenses (SG&A) from sales.

Pros/Cons of Return on Sales Ratio

The return on sales uses operating income (EBIT) on the numerator to measure a company’s profitability.

The operating income metric is capital structure independent (i.e. is before interest expense) and is not affected by differences in tax rates.

Hence, the operating profit (and operating margin) is widely used to compare the performance of different companies along with EBITDA (and the EBITDA margin), such as in financial ratios and valuation multiples.

One drawback to using the return on sales ratio, however, is the inclusion of non-cash expenses, namely depreciation and amortization.

The entire cash flow impact of capital expenditures (CapEx) – typically the most significant outflow of cash related to core operations – is also not reflected by the operating profit metric.

Suppose we have a company that generated a total of $100 million in sales, with $50 million in COGS and $20 million in SG&A incurred.

If we subtract COGS from sales, we are left with $50 million in gross profit (and a 50% gross profit margin).

Next, we can subtract SG&A from gross profit to arrive at the company’s operating profit.

Since we now have the two necessary inputs to calculate the ROS ratio – we can now divide the operating profit by sales to arrive at a return on sales of 30%.

Therefore, the 30% ratio implies that if our company generates one dollar of sales, $0.30 flows down to the operating profit line. 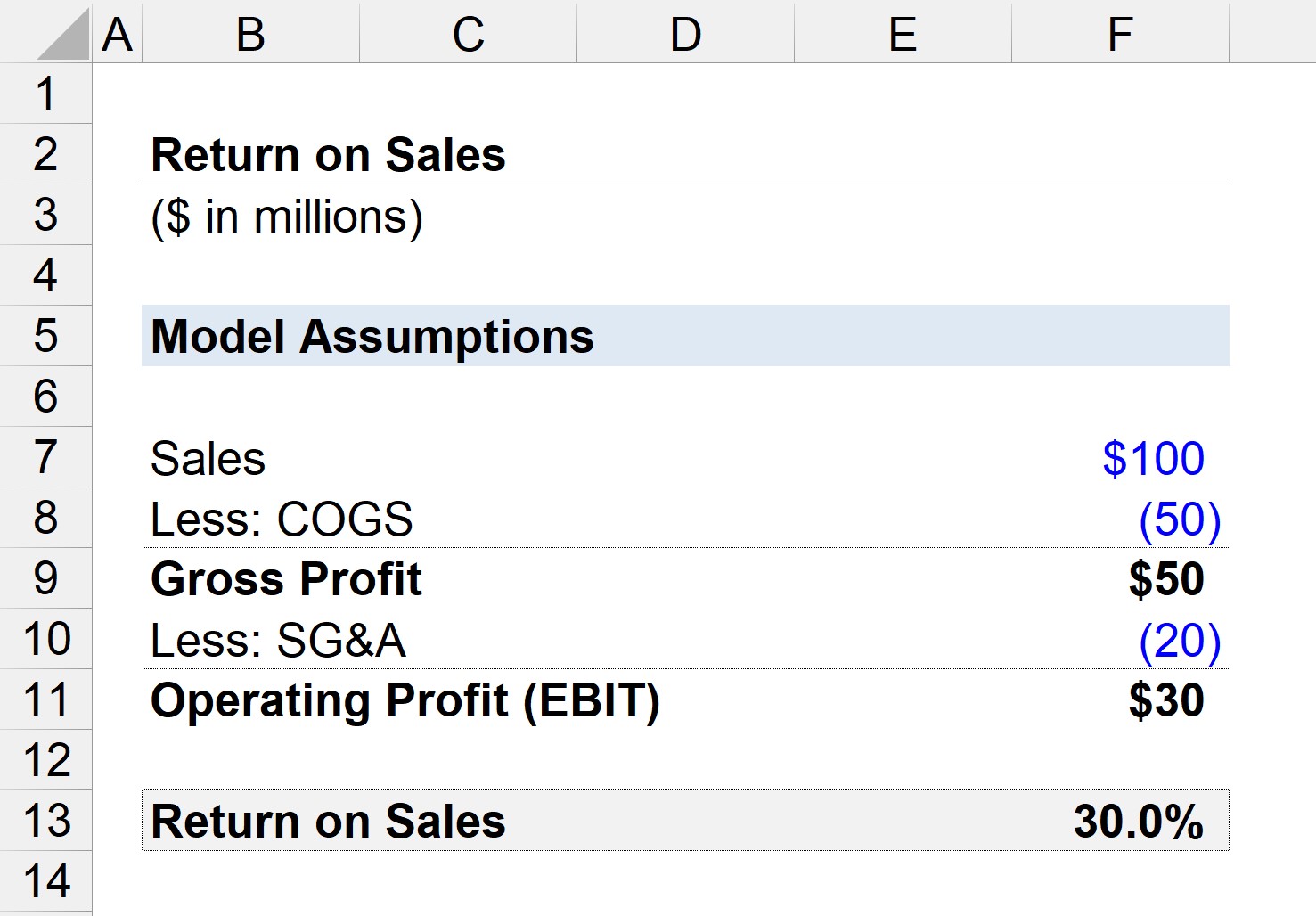