What is the Holding Period Return (HPR)?

How to Calculate the Holding Period Return (HPR)

The holding period return (HPR) refers to the return received on an investment (or portfolio of securities) throughout the period during which the investment was held.

Generally expressed as a percentage, there are two components to the total holding period return (HPR):

More specifically, an investor can earn returns in the form of capital appreciation (i.e. selling the investment at a price higher than the purchase price) and receiving income, such as dividends or interest income.

Calculating the holding period return (HPR) starts by subtracting the beginning value of an investment from the ending value to arrive at the capital appreciation value, i.e. the capital gain.

The capital appreciation formula – i.e. ending value minus beginning value – measures how much an investment how grown (or declined) in price since the initial purchase.

A capital gain occurs if the sale price exceeds the purchase price, whereas if the security was sold for less than the initial price paid on the original date of purchase, the investment would be sold for a capital loss.

The amount of income received is then added to the capital appreciation in the next step.

The resulting figure represents the total return, i.e. the sum of the capital appreciation and income.

With the numerator calculated, the final step is to divide by the beginning investment value, as shown by the formula below.

The return can also be calculated using the following formula if the investment consists of stocks.

The holding period can range from a couple of days to multiple years, so annualizing the returns is necessary to compare the returns of different investments.

For instance, the absolute HPR of an investment could be less than that of another investment but be greater on an annualized basis.

The annualized holding period return makes it easier to compare returns among investments with varying holding periods (i.e. so that they are “apples to apples”).

Suppose you purchased one share in a public company for $50 and held onto the investment for two years.

During the two-year holding period, the share price rose to $60, reflecting a capital appreciation of $10 (a 20% increase).

With the first component of returns calculated – i.e. the $10 capital appreciation – the next step is to add the total dividend income received, which we’ll assume was $2 in total received since the date of purchase.

The remaining step is to divide the total return by the beginning value, i.e. the $50 purchase price. 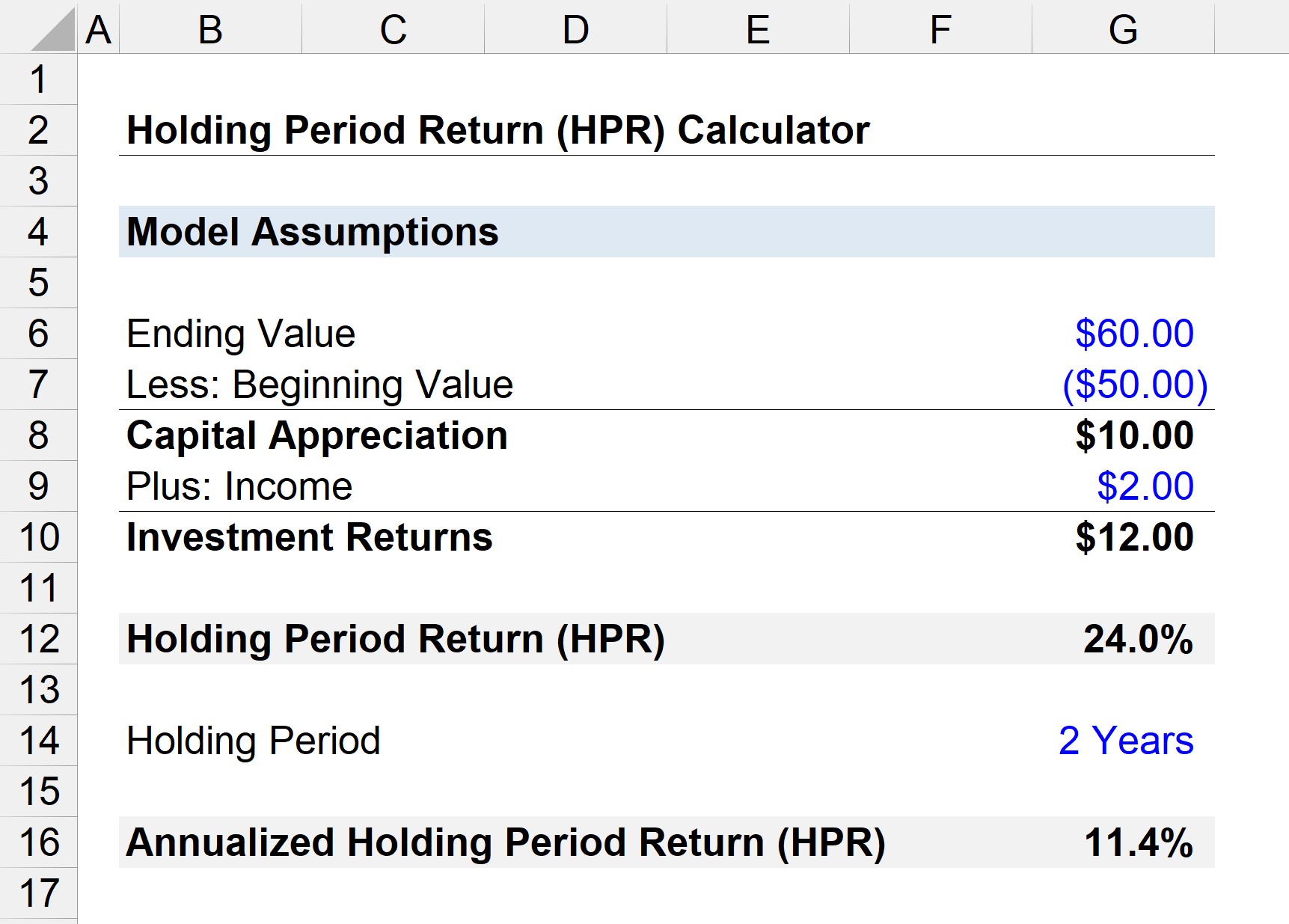