What is an Original Issue Discount (OID)?

An Original Issue Discount (OID) refers to a feature of debt financing in which the issuance price is less than the stated redemption price.

How to Calculate the Original Issue Discount (OID)

An original issue discount (OID) occurs when debt securities are sold below their redemption price.

If a debt instrument is sold at a discounted price lower than the redemption price – i.e. the par value – an original issue discount (OID) is created.

The OID is the difference between the redemption price and the discounted offering price of the debt.

Typically, the reduction from the redemption price (i.e. the “haircut”) is around the 1% to 2% range.

The inclusion of an OID is most often related to making the debt offering more attractive to potential investors.

In such cases, since the bondholder purchased the bonds at a discount price lower than the par value, there is a greater chance of obtaining higher returns.

The original issue discount (OID) is equal to the difference between the stated redemption price and the issuance price.

Suppose that a company is attempting to raise $100,000 in the form of debt.

To make the financing more marketable to potential lenders, the company offers to accept $98,000 in capital rather than the entire $100,000.

However, on the maturity date, the borrower is still obligated to pay back the full $100,000 – plus the periodic interest expense, which is based on the stated interest rate and the $100,000 principal.

Considering the issuer receives less than the full principal, it is reasonable to ask, “Why might a company decide to offer an original issue discount (OID) when raising debt?”

The original issue discount (OID) causes the debt issuance to be more appealing to potential lenders in the market, i.e. it is offered as a “deal sweetener” since the OID offers higher yields with less capital contributed.

The bondholder can then reinvest those leftover funds elsewhere, and the coupon payments are received at higher effective interest rates, increasing the total returns further.

While not always the case, the issuer could face difficulty raising enough capital to meet their total financing needs. The issuer’s credit health could be the reason, or the amount of debt raised could be concerning for risk-averse lenders (e.g. leveraged buyouts, “LBOs”).

Companies seeking to raise debt capital in a high-interest rate market could be hesitant given the risk of being stuck with high-interest expense payments over a long period.

If interest rates were to decline later, the high-interest rate bonds – i.e. priced above-market – could soon burden the issuer.

Therefore, the risk is better mitigated by offering low-coupon or zero-coupon bonds with an original issue discount (OID).

Bonds are often issued at a discount – i.e. their offering price is lower than their par value.

Generally, there are two types of bonds with an OID:

Whether there are no coupons or relatively low coupons paid, the discounted issuance price positively impacts bondholder returns (e.g. yield to maturity)

For original issue discount (OID) accounting, the OID is amortized across the borrowing term and treated as a form of taxable interest.

The OID must be amortized over the debt term and treated as non-cash interest, just like accounting for financing fees.

The three-statement impact of an OID is described below:

Under U.S. GAAP, the OID amortization expense reduces the pre-tax income on the income statement over the borrowing term.

However, the actual taxes paid are not reduced – thus, there is a difference between the taxes reported for book and tax purposes.

Consequently, deferred tax assets (DTAs) are created from the temporary timing difference associated with the OID, which gradually reverses as the maturity date nears.

For the taxes owed by the bondholder to the IRS, the tax expense due could factor in the so-called “phantom income,” i.e. the difference between the original amount and guaranteed payout at maturity.

The positive gain will not be received until the date of maturity, but the bondholder can still be taxed on the phantom income before then.

Suppose that a company decided to issue OID bonds with a stated redemption price of $1 million (“100”).

If the issuance price was offered at a 2% discount to the redemption price, the bonds were offered for $980k (“98”).

The OID is the discount or the difference between the original face value and the price paid for the bond, so the OID amounts to $20,000.

If we assume the amortization period, i.e. the term of the borrowing – is five years, the OID amortization is $4k per year.

In Year 1, the OID is $20k and is reduced by $4k in amortization per year, equaling zero by the end of Year 5.

As a general modeling best practice, we recommend wrapping the “MIN” function between the beginning OID balance and the amortization expense to ensure the OID does not decline below zero.

While not applicable to our modeling exercise, the interest expense would still be based on the $1 million redemption price, i.e. the face value of debt.

As the bond reaches maturity, the balance of the OID declines to zero, as the book value of the bonds returns to the $1 million par value. 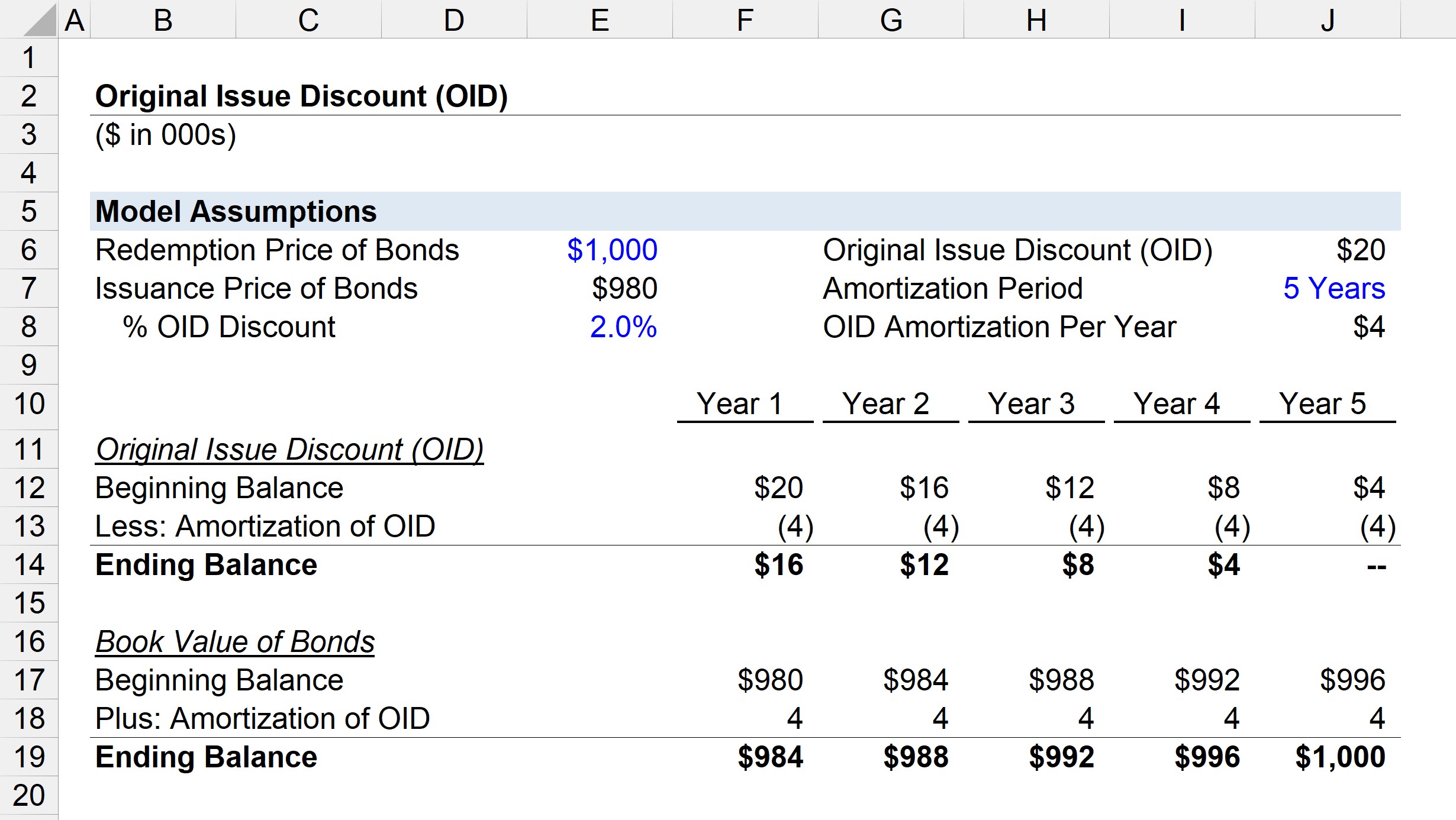